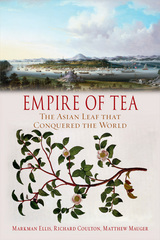 Although tea had been known and consumed in China and Japan for centuries, it was only in the seventeenth century that Londoners first began drinking it. Over the next two hundred years, its stimulating properties seduced all of British society, as tea found its way into cottages and castles alike. One of the first truly global commodities and now the world’s most popular drink, tea has also, today, come to epitomize British culture and identity.

This impressively detailed book offers a rich cultural history of tea, from its ancient origins in China to its spread around the world. The authors recount tea’s arrival in London and follow its increasing salability and import via the East India Company throughout the eighteenth century, inaugurating the first regular exchange—both commercial and cultural—between China and Britain. They look at European scientists’ struggles to understand tea’s history and medicinal properties, and they recount the ways its delicate flavor and exotic preparation have enchanted poets and artists. Exploring everything from its everyday use in social settings to the political and economic controversies it has stirred—such as the Boston Tea Party and the First Opium War—they offer a multilayered look at what was ultimately an imperial industry, a collusion—and often clash—between the world’s greatest powers over control of a simple beverage that has become an enduring pastime.
AUTHOR BIOGRAPHY
Markman Ellis is professor of eighteenth-century studies at Queen Mary, University of London. Richard Coulton is a lecturer in the Department of English at Queen Mary, University of London. Matthew Mauger is a lecturer at Queen Mary, University of London.
REVIEWS
“Empire of Tea is an intoxicating brew. Marshalling a dizzying array of archival material from nearly 400 years of English tea-drinking, the authors of this deeply erudite, highly readable, and often very funny book have written the definitive history of the most sober yet intoxicating of beverages. A triumphant and authoritative account of the inescapably foreign yet indispensably English object and act that we call tea.”
— Jerry Brotton, University of London

“Empire of Tea is a wonderfully wide-ranging and illuminating study of tea (the commodity, the drink, its rituals, its associations) that combines a long-term history of its changing place in the national, imperial, and global economy with fascinating insights into how it became embedded in British culture. Commodity histories tell us not just about our material life but reveal the dynamics of culture. Empire of Tea is one of the best.”
— John Brewer, California Institute of Technology

“Deeply researched and elegantly written, Empire of Tea is as refreshing as its subject, transporting the reader on a voyage of discovery into the complex and often surprising history of the leaf that conquered the world.”
— Richard Hamblyn, University of London

“‘Tea’ has at least five meanings: the shrub Camellia sinensis; its leaf; the dried commodity; the infusion made from it; and the occasion for consuming the infusion. As Markman Ellis, Richard Coulton, and Matthew Mauger show in this stimulating volume, history is steeped in the stuff.”
— Nature

“It’s a story of great scope. The genre of ‘The Food/Drink/Condiment that Made the Modern World’ has become a cliché, and many performances of this sort are shallow, overstated, or merely cute. But in the right hands, telling the history of foodstuffs and foodways responds to current calls for histories of wider scope: histories of the longue durée; of global exchanges and contacts between cultures; and of the relations between human doings, things and the environment. Empire of Tea is an important example, sometimes brilliantly told . . . a history of modernity told through one of its consumable commodities.”
— London Review of Books

“Bearing an attractive title, this book details the process of how, from the 17th century, tea entered England, and Europe in general, and became a favored drink for both the social elite as well as the working class. . . . A mandatory read for anyone interested in learning about how tea ‘conquered the [Western] world.’. . . Essential.”
— Choice

“For those tempted to begin the tale of British tea-drinking with the Opium Wars, or with the establishment of Indian tea plantations, this book offers a richly textured history of the ‘empire’ that preceded, and long outgrew, those events.”
— Times Literary Supplement

"The authors of this fascinating history tell the brew’s history from a gendered, botanic, and poetic point of view. And all three lenses are relevant since tea became the personal realm of dreamy Duchesses who debated endlessly on the different types, while the famous opium eater Thomas De Quincey referred to his drug of choice ecstatically as 'bewitched water,' thinking that it generated a kind of tea. . . . Accompanying this excellent narrative is a wealth of visual material from across the ages. . . . The sheer wealth of information in the book is to be savored over a refreshing cup of tea—whether Darjeeling, oolong, or Assam, is up to the reader."
— Outlook Traveller

"In their focus on just one commodity—tea—the authors have offered a fine study of a plant that has, as they argue, 'shaped the patterns and practices of global modernity.' . . . The book is more than just a history of tea-drinking. It also offers insights into the global connections facilitated by this one plant. The title is no coincidence. Empire of Tea suggests that tea was an active agent in the development of empire. It created its own 'empire' of consumers, but it also offers another window onto the empire of the East India Company."
— Archives of Natural History

"Empire of Tea is a beautifully produced volume, outstanding at first sight for its seventy-seven exquisitely reproduced illustrations, fourteen of them in color. This is such an unusual luxury these days in a scholarly work that Reaktion Books has to be lauded for offering such gorgeously rare images to the book’s authors and readers. Empire of Tea’s text is no less polished than its visuals, as they together animate the discourses and representations that surrounded and popularized tea in the British Isles and eventually for British diasporas hundreds of thousands of miles away from the lands where it was grown."
— Canadian Journal of History

"From the Boston Tea Party to the PG Tips chimpanzees’ tea party, this fascinating history is well researched and entertainingly written in a beautifully produced book. Just the book, in fact, to enjoy, as this reviewer did, with his afternoon tea."
— Historic Gardens Review

"Empire of Tea is not only thoroughly researched and written in a manner so that anyone will appreciate the rich story of tea behind what we take for granted, but the book’s illustrations from paintings and sketches are quite outstanding. Ellis, Coulton, and Mauger have produced one of the most gripping historical and contemporary writings I have encountered in a long while."
— Methodist Recorder

"The world history of tea is an enormous project—one that a single book cannot pretend to accomplish. The strength of this book is in its narrower focus on the cultural history of the incorporation and transformation of tea into British society, primarily in the eighteenth century. As the authors show, this is the crucial century—though understudied until now—for understanding how tea came to be a central force in British society. This is a [fine] addition to the myriad histories of foodways and cultural commodities, on a food commodity that perhaps more than any other formed an empire."
— Food, Culture & Society

"The authors take us on a wonderful journey to view tea’s role in empire-building by Britain and the response by the colonized. . . . Today, the use of the teabag has made tea drinking more convenient and more efficient, but one wonders whether it has come at the expense of something valuable—that is, in the disappearance of the semiritualized preparation of the brew and the reflectiveness it had evoked in the performer of the ritual. Empire of Tea returns us to that space of contemplation. It is a deeply rewarding book not just for the aficionados of tea but also for someone like me, a devotee of coffee."
— Open Magazine (India)

"A thoroughly researched book on the history of tea. . . . Shows how the world’s greatest powers fought to gain 'control over a simple beverage that became an enduring pastime.'"
— Kolkata Telegraph (India)

"Empire of Tea is an extensively researched volume, which provides a rich cultural history that explores how the British 'way of tea' became the norm across the Anglophone world. . . . In a nutshell, this book encompasses the aromatic history of tea making its inroads into the British household."
— Uday India Magazine

"For those with an interest in history, the focus on tea provides an unusual insight into the social, cultural, and economic history of Britain and its trade partners that ends with twentieth century innovations such as tea machines and the advent of the teabag."
— OxVeg News

"A gripping read. . . . The book is a great read for a lazy Sunday afternoon. And the reading experience can only be enhanced further if you can somehow complement it with a few cups of hot tea."
— Sunday Guardian Live (India)


Introduction
One: Early European Encounters with Tea
Two: Establishing the Taste for Tea in Britain
Three: The Tea Trade with China
Four: The Elevation of Tea
Five: The Natural Philosophy of Tea
Six: The Market for Tea in Britain
Seven: The British Way of tea
Eight: Smuggling and Taxation
Nine: The Democratization of Tea Drinking
Ten: Tea in the Politics of Empire
Eleven: The National Drink of Victorian Britain
Twelve: Twentieth-century Tea
Epilogue: Global Tea