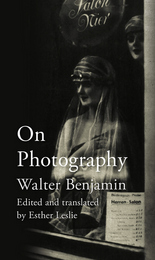 Walter Benjamin’s 1931 essay “A Short History of Photography” is a landmark in the understanding and criticism of the medium, offering surprising new takes on such photographic pioneers as David Octavius Hill and Nicéphore Niépce and their aesthetic and technical achievements.

On Photography presents a new translation of that essay along with a number of other writings by Benjamin, some of them presented in English for the first time. Translator and editor Esther Leslie sets Benjamin’s work in context with prefaces to each piece and contributes a substantial introduction that considers Benjamin’s engagement with photography in all its forms, including early commercial studio photography, the uses of photography in science, and much more.
AUTHOR BIOGRAPHY
Walter Benjamin (1892–1940) was a German philosopher and cultural critic and one of the most important theorists of the twentieth century. Esther Leslie is professor of political aesthetics at Birkbeck, University of London. She is the author of Hollywood Flatlands: Animation, Critical Theory and the Avant Garde; Synthetic Worlds: Nature, Art and the Chemical Industry; and Walter Benjamin, the latter two also published by Reaktion Books.
TABLE OF CONTENTS


Introduction: Walter Benjamin and the Birth of Photography
Esther Leslie

Nothing Wrong with the Illustrated Press! (1925)

Paris, the City in the Mirror: Declarations of Love by Poets and Artists to the ‘Capital of the World’ (1929)