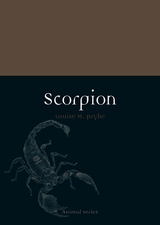 No creature has quite the sting in our mythology and folklore as the scorpion. From the dawn of human civilization they have been a dangerous figure in our imaginations—poisonous, precise, and deadly quiet—but as Louise M. Pryke shows in this book, their bad reputation has overshadowed many exceptional qualities. Scurrying across hundreds of millions of years and across every continent except Antarctica, this book gives the scorpion its due as one of nature’s longest lasting survivors.

Indeed scorpions are older than dinosaurs. An ancient arthropod, their form—notable for its pair of pincers and an elegant tail that holds a menacing stinger high in the air in a permanent striking position—hasn’t changed since prehistoric times, though today there are some 1700 different species. Throughout our existence scorpions have served as a powerful cultural and religious symbol—sometimes dangerous, sometimes protecting—from the Egyptian goddess Serket to Zodiac astrology to folk medicine. A fascinating tour that takes us from the art of North Africa to the American Civil War to the markets of Beijing, Scorpion is an homage to one of earth’s oldest residents.
AUTHOR BIOGRAPHY
Louise M. Pryke is a research associate at the University of Sydney.
TABLE OF CONTENTS