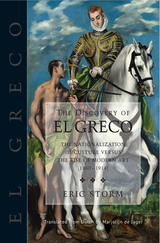 Now in English, this book, originally published in Dutch and translated to Spanish for the fourth centenary celebration of the death of El Greco in 2014, is a comprehensive study of the rediscovery of El Greco -- seen as one of the most important events of its kind in art history. The Nationalization of Culture versus the Rise of Modern Art analyses how changes in artistic taste in the second half of the nineteenth century caused a profound revision of the place of El Greco in the artistic canon. As a result, El Greco was transformed from an extravagant outsider and a secondary painter into the founder of the Spanish School and one of the principle predecessors of modern art, increasingly related to that of the Impressionists -- due primarily to the German critic Julius Meier-Graefe's influential History of Modern Art (1914). This shift in artistic preference has been attributed to the rise of modern art but Eric Storm, a cultural historian, shows that in the case of El Greco nationalist motives were even more important. This study examines the work of painters, art critics, writers, scholars and philosophers from France, Germany and Spain, and the role of exhibitions, auctions, monuments and commemorations. Paintings and associated anecdotes are discussed, and historical debates such as El Greco's supposed astigmatism are addressed in a highly readable and engaging style. This book will be of interest to both specialists and the interested art public.