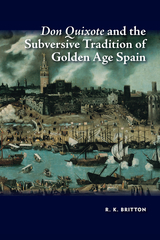 This study offers a reading of Don Quixote; to argue that thiswork was more thanjusthilariously comic entertainment. Rather, it belongs to a "subversive tradition" which constantly questioned the aims and standards of the imperial nation state that Counter-reformation Spain had become from the point of view of Renaissance humanism. In response tocensorshiprun largely by the Inquisition, writers became adept at camouflaging heterodox ideas. Ironically, Cervantes' success in avoiding the attention of the censor by concealing his criticisms beneath irony and humour was so effective that even some twentieth-century scholars have maintained Don Quixote; is a brilliantly funny book but no more.R.K. Britton draws on scholarship—including ideas on cultural authority and studies on the way Don Quixote; addresses history, truth, writing, law, and gender—and engages with the sameissues as Cervantes did.
TABLE OF CONTENTS