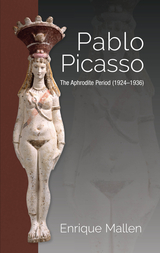 As early as the ancient Greeks, goddesses served as Muses for artistic creation. In essence, a creatively charged energy inspired the artist, leaving a unique and recognizable mark on the artwork. Picasso's relationships with the women in his life was deeply formative, and he often represented them as Muses. He was particularly unabashed in the declaration of his feelings to one of them, Marie-Therese Walter, his youthful mistress of 1927. But at that point Picasso was still married to Olga Khokhlova, thus forced to practice the utmost discretion. His marriage to Olga made him increasingly frustrated with her imposed bourgeois expectations. As a release from this marital burden, Marie-Therese was ever present in his work, often portrayed as Aphrodite with a wreath in her hair, with a basket of flowers and fruits by her side. Marie-Therese was the Dream—the Muse. This fertile period coincided with the strong influence of surrealism which helped liberate Picasso's psyche from the straitjacket that Olga's lifestyle imposed on him. By 1935, however, the model and mistress became a mother to Maya, radically changing the role she previously had. The following year Picasso was introduced to a new woman, Dora Maar, an encounter that signalled the beginning of the end of Marie-Therese's exclusive claim on Picasso's affections and the closing of an artistic period clearly marked by fertility. The Aphrodite Period (19241936) provides new insights and analysis of Picasso's life as recently uncovered through the research of the Online Picasso Project. This time-span is one of the most illustrative periods of Picasso's career in that it clearly demonstrates the close interdependence between sexuality and artistic creativity that characterize Picasso's entire output.