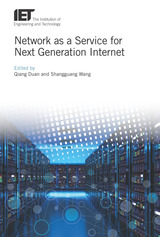 With the rapid progress in networking and computing technologies, a wide variety of network-based computing applications have been developed and deployed on the internet. Flexible and effective service provisioning for supporting the diverse applications is a key requirement for the next generation internet. However, the current internet lacks sufficient capability for meeting this requirement, mainly due to the ossification caused by tight coupling between network architecture and infrastructure. Service-Oriented Architecture (SOA), which has been widely adopted in cloud computing via the Infrastructure-as-a-Service (IaaS), Platform-as-a-Service (PaaS), and Software-as-a-Service (SaaS) paradigms, may be applied in networking to decouple network architecture and infrastructure; thus offering a promising approach to addressing some fundamental challenges to the next generation Internet. In general, such a service-oriented networking paradigm is referred to as Network-as-a-Service (NaaS). This book presents the state of the art of the NaaS paradigm, including its concepts, architecture, key technologies, applications, and development directions for future network service provisioning. It provides readers with a comprehensive reference that reflects the most current technical developments related to NaaS.