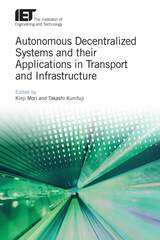 BUY
Autonomous Decentralized Systems and their Applications in Transport and Infrastructure
edited by Kinji Mori and Takashi Kunifuji
The Institution of Engineering and Technology, 2019
Cloth: 978-1-78561-281-7
eISBN: 978-1-78561-282-4

In a large and complex system, such as a railway network, it is often not an option to stop operation at any time. Even if a part of the system fails, is being repaired or modified, the system has to keep functioning. This leads to many requirements for on-line expansion, on-line maintenance, and fault-tolerance. Dynamic changes demand next-generation control, information and service systems to be based on adaptive, reliable and reusable technologies and applications. Such systems are expected to have the characteristics of living systems composed of largely autonomous and decentralized components. Hence they are called Autonomous Decentralized Systems (ADS).

This book describes the concept, architecture and technologies of ADS and their applications in intelligent control, information and service systems, with a focus on transport. ADS is explained first using the example of the Japanese railway transport system; applications in other fields and countries follow. The goal is to describe the ADS concept and the technologies, applications and businesses on the basis of a consistent concept for achieving intelligent systems such as for manufacturing, transportation service, air traffic, robotic and distributed services.