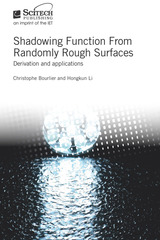 The shadowing function is an important element in the simulation and calculation of how electromagnetic waves scatter at randomly rough surfaces. Its derivation and use is an active, interdisciplinary area of research with practical applications in fields such as radar, optics, acoustics, geoscience, computer graphics and remote sensing.

This book addresses the general problem of the derivation of the shadowing function from randomly rough surfaces. The authors present an overview of theory and advances of this topic by detailing recent progress. Firstly, the simpler problems are investigated (monostatic case - 1D surface - one reflection) progressing in difficulty to more complicated problems (bistatic case - 2D surface - multiple reflections). In addition, the authors focus on the introduction of the simplifying assumptions to derive closed-form expressions of the shadowing function and quantify their impact on the accuracy of the resulting models. Applications of the shadowing function in problems encountered in physics are also addressed.

The problem of the derivation of the shadowing function from a rough surface is at the boundary between several scientific communities, each with its terminology. This book makes the link between these different communities and will help the reader to understand the theoretical aspects of this problem while giving practical applications.