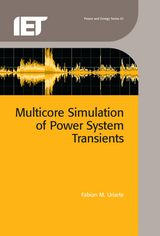 Multicore Simulation of Power System Transients shows how to parallelize the simulation of power system transients using a multicore desktop computer. The book begins by introducing a power system large enough to demonstrate the potential of multicore technology. Then, it is shown how to formulate and partition the power system into subsystems that can be solved in parallel with a program written in C#. Formulating a power system as subsystems exploits multicore technology by parallelizing its solution and can result in significant speedups. For completeness, the power system presented in this book is also built and run in MATLAB®/Simulink® SimPowerSystems - one of the most widely-used commercial simulation tools today.