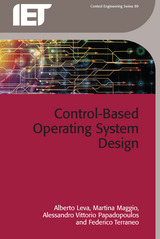 Control-Based Operating System Design describes the application of system- and control-theoretical methods to the design of computer operating system components. It argues that computer operating system components should not be first 'designed' and then 'endowed with control', but rather when possible conceived from the outset as controllers, synthesised and assessed in the system-theoretical world of dynamic models, and then realised as control algorithms. Doing so is certainly a significant perspective shift with respect to current practices in operating system design, but the payoff is significant too. In some sense, adopting the suggested attitude means viewing computing systems as cyber-physical ones, where the operating system plays the computational role, the physical elements are the managed resources, and the various (control) functionalities to be realised, interact and co-operate as a network.
TABLE OF CONTENTS