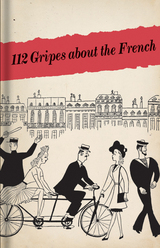 BUY
112 Gripes about the French: The 1945 Handbook for American GIs in Occupied France
edited by Bodleian Library
Bodleian Library Publishing, 2013
Cloth: 978-1-85124-039-5
When American troops arrived in Paris at the end of World War II, they were at first welcomed by the local population. However, the French soon began to resent the Americans for their brashness and display of wealth, while the Americans found the French and their habits equally irritating and incomprehensible: they bathed too little, drank too much, and were almost unfailingly unfriendly.
To bridge the cultural divide, the War Department commissioned humorist Leo Rosten to write this surprisingly candid guide that paired common complaints about the French with answers aimed at promoting understanding. From the fascinations of French nightlife to Gallic grooming and fashions, the guide sought to correct the misconceptions behind a litany of common complaints: Laissez-faire is not in fact a call to laziness, and the French do not play checkers in cafés all day—though they do extol the virtues of a leisurely lunch. The moral principles of the Frenchwoman ought not to be drawn from the few one might find loitering on the fringes of the camp.
Beyond their intended instructive purposes, the grievances included in the guide are at times as revealing of the preconceptions of the American servicemen as they are of the French, as well as offering fascinating insight into the details of daily life immediately after the war, including the acute poverty, the shortage of food and supplies, and the scale of destruction suffered by France during the six years of conflict. Illustrated throughout with charming cartoons and written in a direct, no-nonsense style, 112 Gripes about the French is by turns amusing and thought-provoking in its valiant stand against prejudice and stereotype.

THE FRENCH AND US

THE FRENCH AND THE GERMANS

“THEY GOT OFF PRETTY EASY IN THIS WAR”