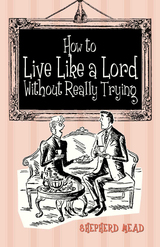 In 1958, ad man and soon-to-be best-selling author Shepherd Mead moved to England with his family to pursue his career. Six years later, his observations on the oddities of British culture were enough to compile a satirical guidebook for fellow Americans planning to visit from across the pond. The blunders that could befall them were many. For instance, explains Mead, “Pants are always underpants and what you wear out in the open are trousers. Mistakes in this area can lead to nasty misunderstandings.”

Structured around the fictional Brash family—Peggy and Buckley Brash and their two children—the book, originally published in 1964, includes chapters on such topics as “How to Dress in England,” “The Dream House and How to Rebuild It,” and “How to Live with the Upper Classes Without Having Any Money.” Through the Brash family’s encounters with the British and their amusingly bewildered conversations as they attempt to interpret this alien way of life, Mead answers with obvious affection and quirky humor such questions as “Is England really a pest hole?” and “Do English schools create sex madness?”

Written with Mead’s characteristic incisive wit and illustrated with the original dynamic cartoons, How to Live Like a Lord Without Really Trying is packed with pithy advice that is equally revealing of Britain in the 1960s as its bemused American visitors.
AUTHOR BIOGRAPHY
Shepherd Mead (1914–94) was an American advertising consultant and the author of the best-selling satirical guidebooks books How to Succeed in Business without Really Trying and How to Succeed with Women without Really Trying. The former was developed into a Pulitzer-prize winning musical.
TABLE OF CONTENTS


This is not a U.S. Government Publication
A Note to British Readers

Appendix
Sex in Britain
How to Understand British