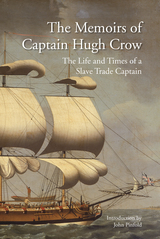 Numerous documents attest to the horrific conditions endured by African slaves during the centuries of the Atlantic slave trade. Less well known is the perspective of those who wielded power during this dark time in human history. The Bodleian Library fills that gap here with the memoirs of a principal figure in the slave trade, Captain Hugh Crow.

The first-hand account of a man who commanded one of the last legal slave vessels to cross the Atlantic, Life and Times of a Slave Trade Captain offers a revealing if frequently troubling look into the psyche of a slave trader. His chronicle leaves nothing to the imagination, as he recounts the harsh routine of daily life on a slave vessel, where on average a fifth of the crew—let alone the human cargo—never survived the crossing. Crow portrays himself as an “enlightened” slaver, a claim he justifies through the link between his close attention to his “negroes” and his financial success, and the songs composed for him by the slaves. His account also includes commentary on the social propriety of the slave trade and notes about the conditions on West Indian and Caribbean plantations as well as on slave ships. John Pinfold’s illuminating introduction recounts the life of Hugh Crow and sets him in the rich historical context of eighteenth-century mercantilism and its battle with the abolitionist movement. An eye-opening read, Life and Times of a Slave Trade Captain reveals an often overlooked facet in the complicated history of transatlantic slavery.

REVIEWS
"This edition makes available to a wider audience a classic narrative of the slave trade. That Crow's many claims must be treated with utmost caution does not lessen its importance, for that lies in the perspective it gives into a group of men among the most reviled by history for the trade in which they were engaged."
— Emma Christopher, International History Review


Introduction
Chapter I
Author's early predilection for a seafaring life...
Chapter II
Voyage to Kingston...
Chapter III
Author's prejudices against the African trade...
Chapter IV
Author captured by a French ship, and carried to L'Orient...
Chapter V
Author meets his brother...
Chapter VI
Voyage to Bonny in 1801...
Chapter VII
Author practises the men at the guns on board the Mary...
Chapter IX
Handsome letter to the author from the underwriters...
Chapter X
Reflections on African discoveries...