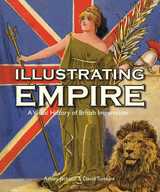 Through more than 150 striking and original images from the John Johnson Collection of Printed Ephemera at the Bodleian Library, Illustrating Empire tells the history of the British Empire from the age of discovery through World War II. This wealth of visual material was used to promote, record, and celebrate the development of the Empire, which by 1922 included more than thirteen million square miles—or almost a quarter of the Earth. The captions that accompany the illustrations reveal the narrative of the Empire and unlock the history and meaning behind the images.

Following a general introduction that provides an overarching discussion of the many facets of the Empire’s long history, the book is structured around eight major themes: emigration and settlement; imperial authority; exploration and knowledge; trade and commerce; travel and communications; popular culture; exhibitions and jubilees; and politics. Along the way, Illustrating Empire examines the significance of media in conveying and creating ideas about empire and the non-European world. It also provides a clear summary of debates regarding the significance of empire in British culture.

This informative and accessible visual history represents a significant contribution to the literature on culture and empire and will be an engaging and useful source of historical information for general readers and scholars alike.

REVIEWS
“Over the past 30 years historians have expended a good deal of time and energy exploring how empire and the non-European world has been represented in British popular culture. But while much has been written on the subject, not very much has been seen. That’s what makes the images on these pages so revealing. Taken from the Bodleian Library’s John Johnson Collection of Printed Ephemera, they give an insight into how the British public encountered a range of imperial themes. They offer us a rich and fascinating glimpse into Britain’s social and cultural history.”
— BBC History Magazine