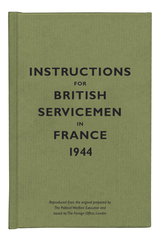 Instructions for British Servicemen in France, 1944
edited by Bodleian Library
Bodleian Library Publishing, 2006
Cloth: 978-1-85124-335-8
When World War II drew to a close, British servicemen were sent to France to assist in the liberation and recovery of their war-ravaged ally, and a small but indispensable guidebook was packed into their knapsacks for the mission. A follow-up to the hugely successful publication of Instructions for American Servicemen in Britain, 1942, this pamphlet offers a rare and insightful glimpse into the lives of soldiers during the Second World War.

Instructions for British Servicemen in France, 1944 reminds British soldiers of the common points of culture and history Britain shares with France, and, above all, their mutual aim of defeating Hitler. The pamphlet attempts to teach British soldiers the ways of the French and warns them not give in to their urges: “If you should happen to imagine that the first pretty French girl who smiles at you intends to dance the can-can or take you to bed, you risk stirring up a lot of trouble for yourself—and for our relations with the French.” The pamphlet also features a pronunciation guide (“Bonjewer, commont-allay-voo?”), a list of useful phrases, and an unflinching account of the diseases and poverty ravaging the citizens of battle-torn France.

Instructions for British Servicemen in France, 1944 captures the complex dynamics of Anglo-French relations during the Second World War on an intimate and often humorous level and reveals all the fascinating aspects of life off the battlefield. Essential for the shelf of every historian and history buff, Instructions for British Servicemen in France, 1944 is a small document that nonetheless speaks volumes about its era.
REVIEWS
"Sympathetic, even lighthearted at times."
— Noam Cohen, New York Times


France
What Occupation Has Meant
The Country
The Making of France
What are the French People Like?
How France was Governed
What Do the French Think of Us?
Your Own Life in the Country
Money
Do's
Don'ts
Making Yourself Understood
Words and Phrases
Weights and Measures
Security Note
Road Signs