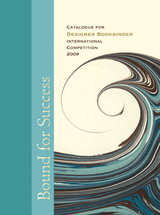 Published to celebrate the winning entries in the prestigious 2009 Designer Bookbinders International Bookbinding Competition held at the Bodleian Library, Bound for Success presents nearly four hundred of the most skillful and creative examples of contemporary bookbinding across the world.

Designer Bookbinders is one of the foremost international bookbinding societies, and this competition catalog features a remarkable range of styles, materials, and approaches to an ancient technique, attracting top binders from around the world. Beautifully designed, Bound for Success is as stunning a book as the bindings it displays. This showcase of the best in modern bookbinding is likely to become a collector’s item among aficionados of bookbinding--as well as a handsome addition to any personal library.

AUTHOR BIOGRAPHY
Jeannette Koch began bookbinding in 1992. Her work is held in private collections in the United Kingdom and Germany, and in the Alec Taylor Collection housed at the British Library.
TABLE OF CONTENTS