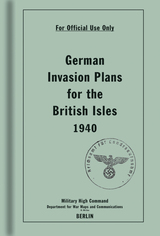 Operation Sealion was the codename for the Nazi invasion of Britain that Hitler ordered his generals to plan after France fell in June 1940. Although the plan ultimately never came to fruition, a few sets of the Germans’ detailed strategy documents are housed in the rare book rooms of libraries across Europe. But now the Bodleian Library has made documents from their set available for all to peruse in this unprecedented collection of the invasion planning materials.
The planned operation would have involved landing 160,000 German soldiers along a forty-mile stretch of coast in southeast England. Packets of reconnaissance materials were put together for the invading forces, and the most intriguing parts are now reproduced here. Each soldier was to be given maps and geographical descriptions of the British Isles that broke down the country by regions, aerial photographs pinpointing strategic targets, an extensive listing of British roads and rivers, strategic plans for launching attacks on each region, an English dictionary and phrase book, and even a brief description of Britain’s social composition.
Augmenting the fascinating documents is an informative introduction that sets the materials in their historical and political context. A must-have for every military history buff, German Invasion Plans for the British Isles, 1940 is a remarkable revelation of the inner workings of Hitler’s most famous unrealized military campaign.
TABLE OF CONTENTS