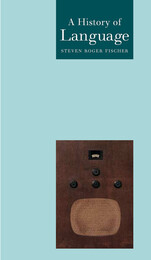 It is tempting to take the tremendous rate of contemporary linguistic change for granted. What is required, in fact, is a radical reinterpretation of what language is. Steven Roger Fischer begins his book with an examination of the modes of communication used by dolphins, birds and primates as the first contexts in which the concept of "language" might be applied. As he charts the history of language from the times of Homo erectus, Neanderthal humans and Homo sapiens through to the nineteenth century, when the science of linguistics was developed, Fischer analyses the emergence of language as a science and its development as a written form. He considers the rise of pidgin, creole, jargon and slang, as well as the effects radio and television, propaganda, advertising and the media are having on language today. Looking to the future, he shows how electronic media will continue to reshape and re-invent the ways in which we communicate.

"[a] delightful and unexpectedly accessible book ... a virtuoso tour of the linguistic world."—The Economist

"... few who read this remarkable study will regard language in quite the same way again."—The Good Book Guide
AUTHOR BIOGRAPHY
Steven Roger Fischer is Director of the Institute of Polynesian Languages and Literatures in Auckland, New Zealand. He is the author of Glyph-breaker (1997). A History of Language is part of Fischer’s trilogy for Reaktion, which also includes A History of Writing and A History of Reading.
REVIEWS
[a] delightful and unexpectedly accessible book . . . a virtuoso tour of the linguistic world' –The Economist

' . . . few who read this remarkable study will regard language in quite the same way again' – The Good Book Guide

'Steven Fischer's intriguing and ambitious study explores a vast terrain, parts of which have scarcely been charted, others examined in some depth over many years and, as he relates, many centuries. Throughout, he addresses hard questions that bear directly on fundamental and distinctive aspects of human nature and achievement. A stimulating and highly informative inquiry' – Noam Chomsky