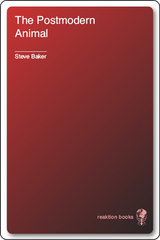 In The Postmodern Animal, Steve Baker explores how animal imagery has been used in modern and contemporary art and performance, and in postmodern philosophy and literature, to suggest and shape ideas about identity and creativity. Baker cogently analyses the work of such European and American artists as Olly and Suzi, Mark Dion, Paula Rego and Sue Coe, at the same time looking critically at the constructions, performances and installations of Robert Rauschenberg, Louise Bourgeois, Joseph Beuys and other significant late twentieth-century artists. Baker's book draws parallels between the animal's place in postmodern art and poststructuralist theory, drawing on works as diverse as Jacques Derrida's recent analysis of the role of animals in philosophical thought and Julian Barnes's best-selling Flaubert's Parrot.
AUTHOR BIOGRAPHY
Steve Baker is Senior Lecturer in Historical and Critical Studies at the University of Central Lancashire and is the author of Picturing the Beast (1993).
REVIEWS
This is a wonderful book . . . Steve Baker provides the most cogent explanation so far of how the questioning of human identity ineluctably raises issues about animals . . . He has given us a great gift, an understanding of a process unfolding during our own time.'
– Carol J. Adams, author of The Sexual Politics of Meat


1. What is the Postmodern Animal?
2. Animals and Ironies
3. The Human, Made Strange
4. The Unmeaning of Animals
5. Leopards in the Temple
6. The Animal's Line of Flight
7. The Artist's Undoing
8. Fear of the Familiar
References
List of Illustrations
Acknowledgements