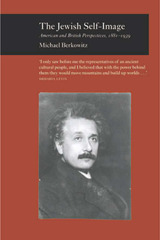 BUY FROM
The Jewish Self-Image: American and British Perspectives, 1881-1939
by Michael Berkowitz
Reaktion Books, 2000
eISBN: 978-1-86189-881-4
Cloth: 978-1-86189-063-4
This text explores the ways in which Jews visualized themselves as a political entity betwen 1881 and 1939. Keen to assimilate into the Western societies of which they were a part, Jews also sought to preserve and re-invent forms of solidarity for themselves. Their efforts of self-assertion in the face of conflicting impulses came to be embodied in such personalities as Theodor Herzl and Rebecca Sieff.
AUTHOR BIOGRAPHY
?Michael Berkowitz is Reader in Modern Jewish History in the Department of Hebrew and Jewish Studies at University College London. He is the author of Zionist Culture and West European Jewry before the First World War (1993) and Western Jewry and the Zionist Project, 1914–1933 (1997).
TABLE OF CONTENTS