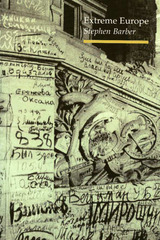 Extreme Europe explores the urban extremes of Europe in their cultural, physical, geographical and mythical dimensions, considering the history and visual culture of Europe in the decade after the fall of the Berlin Wall. Barber's purpose is to examine Europe's cities and their surrounding areas as sites of a conflict between the mesmerizing, all-engulfing power of visual media and the barely surviving traces of tenacious historical culture; his premise is that the "breakdown zones" at Europe's urban edges are the sites where its oppositional and most vital images and languages are being created today.

Barber sets out to explore and define Europe's political and conceptual edges, first making a circuit eastwards through Albania to Turkey, then south- and westwards along the Mediterranean coast, with stops in Crete and Marseille. The book's two other sections move, first, through several decades of history as they can be read in both the surviving and the transformed fabrics of Berlin, and, finally, through the frayed, disaffected multicultural landscapes of Paris's outer suburbs.
AUTHOR BIOGRAPHY
Stephen Barber has been hailed by the Independent on Sunday as "a cultural historian of real distinction ... [who] gives us superb, rich, unjudgemental portraits of multi-stranded societies..." He is the author of Fragments of the European City (Reaktion, 1995) and Edmund White: The Burning World (1999).
REVIEWS
‘[Barber's] book is a rich account of a fracturing continent, re-forming endlessly in the minds of its inhabitants.’ – The Independent on Sunday

‘Barber's account of a journey around the margin's of Euroland is as provocative and illuminating as his previous incursions into the continental mindset . . . a fine eye for the telling detail and a fluid prose style . . . Barber's a useful and rigorous guide to the byways and border-zones of this hugely diverse landmass’ – Untold

'In Stephen Barber's Extreme Europe, we have a writer who carries the city within him.' – Literary Review of Canada