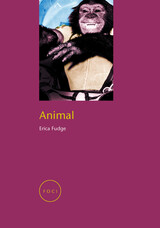 From the pet that we live with and care for, to news items such as animal cloning, and the use of various creatures in film, television and advertising, animals are a constant presence in our lives.

Animal is a timely overview of the many ways in which we live with animals, and assesses many of the paradoxes of our relationships with them: for example, why is the pet that sits by the dinner table never for eating? Examining novels such as Charlotte’s Web, films such as Old Yeller and Babe, science and advertising, fashion and philosophy, Animal also evaluates the ways in which we think about animals and challenges a number of the assumptions we hold. Why is it, for example, that animals are such a constant presence in children’s literature? And what does it mean to wear fake fur? Is fake fur an ethical avoidance of animal suffering, or merely a sanitized version of the unacceptable use of animals as clothing?

Neither evangelical nor proselytizing, Animal invites the reader to think beyond the boundaries of a subject that has a direct effect on our day-to-day lives.
AUTHOR BIOGRAPHY
Erica Fudge is Senior Lecturer in the School of Humanities and Cultural Studies at Middlesex University, London. She is the author of Perceiving Animals: Humans and Beasts in Early Modern English Culture (1999).
REVIEWS
'A brilliant analysis of the ambiguous boundaries that separate and bind humans and animals' - The Irish Times, Dublin
TABLE OF CONTENTS