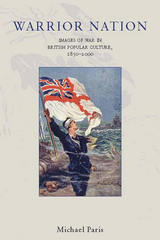 BUY FROM
Warrior Nation: Images of War in British Popular Culture, 1850û2000
by Michael Paris
Reaktion Books, 2002
eISBN: 978-1-86189-464-9
Paper: 978-1-86189-145-7
Cloth: 978-1-86189-078-8
War has always been close to the centre of British culture, but never more so than in the period since 1850. Warrior Nation explores the way in which images of battle, both literary and visual, have been constructed in British fiction and popular culture since this time. The rise of war reporting has helped to shape a society fascinated by conflict, and the development of mass communications has aided in the creation of mass-produced martial heroes and the relation of epic adventures for political ends. To achieve national goals, the notion of war has been promoted as an activity of high adventure and chivalrous enterprise and as a rite of passage to manhood. Using a wide range of media, Michael Paris focuses on how war has been "sold" to boys and young men and examines the "warrior" as a masculine ideal.
AUTHOR BIOGRAPHY
Michael Paris is Senior Lecturer in the Department of Historical and Critical Studies at the University of Central Lancashire. His most recent book is The First World War and Popular Cinema (1999).
REVIEWS
Ever wondered why Britain has fought and won so many wars? Paris's fascinating book goes a long way to answer this question . . . Paris has created a compelling insight into why Britain responded to the call of arms.' –The Good Book Guide

'an absorbing and thought-provoking survey of the presentation of war in popular culture . . . It is impossible in a short review to do justice to the historical sweep, the literary insight and the importance of the issues raised by this stimulating and enjoyable book. I warmly recommend it to you.' -Biggles Flies Again

'This is a splendid book, well written and well researched, which throws light on our understanding of the subject.'
– Michael Dockrell, Department of War Studies, King's College, London
TABLE OF CONTENTS
WARRIOR NATION cover
Imprint page
Contents
Introduction
1 Discovering the Pleasures of War
2 The LittleWars of Empire
3 Preparing for the GreatWar to Come
4 Paths of Glory: 1914–18
5 No MoreWar: 1919–39
6 Fighting the People’s War: 1939–45
7 After the Wars: 1940s–1990s
References
Acknowledgements
Photographic Acknowledgements
Index