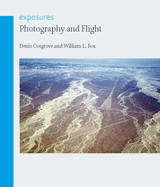 Used for everything from geographic evaluation to secret spy missions, aerial photography has a rich and storied history, ably recounted here in Photography and Flight.
Aerial photography is marked by its dependency on technological developments in both photography and aerospace, and the authors chart the history of this photography as it tracked the evolution of these technologies. Beginning with early images taken from hot-air balloons, fixed platforms, and subsequent handheld camera technology, Denis Cosgrove and William Fox then explain how military reconnaissance and governmental projects were instrumental in catalyzing these and other innovations in the field. They examine pivotal historical moments in which aerial photography began to establish itself as essential tool, such as in World War II military strategies, high-altitude photography taken from postwar rockets and aircraft, and the use of aerial photography during the cold war and the Cuban Missile Crisis. The book also explores the advancement of geographic scholarship through aerial photography, ranging from military excursions into Antarctica to the images of the curvature of the earth taken during the Apollo space missions.
While digital technology and remote sensing have changed the landscape of photography, Photography and Flight argues that they have not diminished the significance of aerial photography in providing images of the earth. Rather, new technologies and resulting innovations such as Google Earth have enabled the mass democratization of access to such information. Photography and Flight ultimately reveals how the camera lens from far away continues to unearth telling details about the land and those who live upon it.
AUTHOR BIOGRAPHY
Denis Cosgrove is professor in the department of geography at the University of California, Los Angeles. He is the author or editor of many books, including Mappings, Imagining Eden: Connecting Landscapes, and High Places: Cultural Geographies of Mountains and Ice. William L. Fox is a writer, independent scholar, and poet. He is also the author of Approaching Nowhere, Observing in an Occupied Wilderness and Oblivion.
TABLE OF CONTENTS

Two    The Camera in the Sky

Three  The Airman's Vision: World War II and After