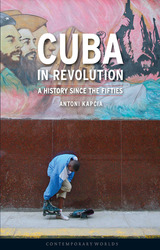 The recent retirement of Fidel Castro turned the world’s attention toward the tiny but prominent island nation of Cuba and the question of what its future holds. Amid all of the talk and hypothesizing, it is worth taking a moment to consider how Cuba reached this point, which is what Antoni Kapcia provides with his incisive history of Cuba since 1959.
Cuba In Revolution takes the Cuban Revolution as its starting point, analyzing social change, its benefits and disadvantages, popular participation in the revolution, and the development of its ideology. Kapcia probes into Castro’s rapid rise to national leader, exploring his politics of defense and dissent as well as his contentious relationship with the United States from the beginning of his reign. The book also considers the evolution of the revolution’s international profile and Cuba’s foreign relations over the years, investigating issues and events such as the Bay of Pigs crisis, Cuban relations with Communist nations like Russia and China, and the flight of asylum-seeking Cubans to Florida over the decades.  The collapse of the Soviet Union between 1989 and 1991 catalyzed a severe economic and political crisis in Cuba, but Cuba was surprisingly resilient in the face of the catastrophe, Kapcia notes, and he examines the strategies adopted by Cuba over the last two decades in order to survive America’s longstanding trade embargo.
A fascinating and much-needed examination of a country that has served as an important political symbol and diplomatic enigma for the twentieth century, Cuba In Revolution is a critical primer for all those interested in Cuba’s past—or concerned with its future.
AUTHOR BIOGRAPHY
Antoni Kapcia is professor of Latin American history at the University of Nottingham. He is also the author of Cuba: Island of Dreams and Havana: The Making of Cuban Culture, and coeditor of The Changing Dynamic of Cuban Civil Society.
REVIEWS

"The great strength of this book is that it helps the reader to see beyond the simplistic accounts of such aspects, and to understand the wider contexts that explain the Revolution's survival. The insight and detail offered here reflect a work that is the product of a sustained scholarly investigation of Cuba. Now professor of Latin American history at the University of Nottingham, Kapcia has been studying Cuba, from outside and from within, for four of the Revolution's five decades of fluctuating fortunes . . . Among the approaching anniversary literature, students of Cuba are unlikely to find a more thoughtful or well-informed analysis of half a century of revolutionary change than Kapcia provides in this book."

"This much-needed account of the Cuban Revolution spans Cuba's history since Castro came to power in 1959. The problems of a philosophy of continual change combined with a desperate attempt to survive the US trade embargo by clinging to the status quo make for interesting dilemmas. In particular, Professor Kapcia explains the trauma brought about by the collapse of the Soviet Bloc in 1989-91. The book is a handy primer for those looking to the future of Latin America and the current lefty-leaning governments."

"This reliably accurate and comprehensive narrative provides an extremely original and insightful analysis of the Cuban revolution. . . . Highly recommended."—Choice
— Choice