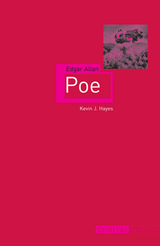 The life of Edgar Allan Poe (1809–49) is the quintessential writer’s biography—great works arising from a life of despair, poverty, alcoholism, and a mysterious solitary death. It may seem like a cliché now, but it was Poe who helped shape this idea in the popular imagination. Despite or perhaps even inspired by his many hardships, Poe wrote some of the most well-known poems and intricately crafted stories in American literature. In Edgar Allan Poe,Kevin J. Hayes argues that Poe’s work anticipated many of the directions Western thought would take in the century to come, and he identifies links between Poe and writers and artists such as Walter Benjamin, Salvador Dalí, Sergei Eisenstein, and Jean Cocteau.

Whereas previous biographers have tended to concentrate on the sorry details of Poe’s life, by contrast Hayes takes an original approach by examining Poe’s life within the context of his writings. The author offers fresh, insightful readings of many of Poe’s short stories, and presents newly-discovered information about previously unknown books from Poe’s library, as well as updated biographical details obtained from nineteenth-century newspapers and magazines. This well-researched biography goes beyond previous scholarship and creates a complete picture of Poe and his significant body of work.

Approachably written, Edgar Allan Poe will appeal to the many fans of Poe’s work—from “The Raven” to the “Tell-Tale Heart”—as well as readers interested in American literary history.

Kevin J. Hayes is a professor of English at the University of Central Oklahoma. His previous books include Poe and the Printed Word,The Cambridge Companion to Edgar Allan Poe,and The Road to Monticello: The Life and Mind of Thomas Jefferson.

REVIEWS
"This [book] fills the significant need for a well-researched, short biography of Edgar Allan Poe that is useful to both scholars and general readers. . . . Hayes has produced an excellent short biography that students, scholars, and Poe's many fans will all find to be an accurate and illuminating introduction to the author's life and work."
— Yvette R. Piggush, Virginia Magazine

2 The Birth of a Poet

5 From Peeping Tom to Detective

8 The Most Noble of Professions