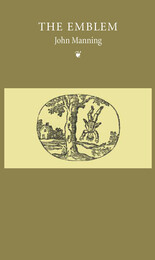 The emblem, an image accompanied by a motto and a verse or short prose passage, is both art and literature: in the emblem tradition, the image presents a story – often with pictorial symbols – and the verse below it drives home the picture-story's moral instruction. It is one of the most fascinating, and enduring, art forms in Western culture.

John Manning's book charts the rise and evolution of the emblem from its earliest manifestations to its emergence as a genre in its own right in the sixteenth century, and then through its various reinventions to the present day. The seventeenth century saw the development of new emblematic forms and sub-genres, and the sharpening of the form for the purpose of social satire. When the Jesuits appropriated the emblem, producing enormous quantities of material, a further dimension of moral seriousness was introduced, alongside a concentration of emblematic "wit". The emblem later came to be directed increasingly at young people and children; in particular, William Blake adopted a fresh attitude towards ideas of the child and childishness. Since then, reprints of 17th-century emblem books have been produced with new plates, and writers and artists from Robert Louis Stevenson to Ian Hamilton Finlay have used emblems in new and subversive ways.
AUTHOR BIOGRAPHY
John Manning is Professor of English at the University of Wales, Lampeter.
REVIEWS
‘The Emblem is impressively broad in scope and is sure to become the standard introductory guide to the genre.’ – Times Higher Education

‘This book is a magisterial performance, sure to be in demand as an introduction to the emblem for general readers, as well as having much to say to emblem specialists’ – Alastair Fowler, University of Edinburgh

‘One of the most challenging and significant re-evaluations of the emblem to have appeared in recent years.’ – Society for Emblem Studies Newsletter

‘Fascinating and enthralling . . . it will long be regarded as the standard work on the subject’ – Church Times