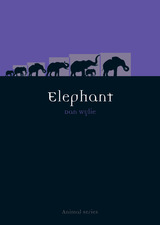 BUY FROM
Elephant
by Dan Wylie
Reaktion Books, 2008
Paper: 978-1-86189-397-0
eISBN: 978-1-86189-615-5
Aristotle characterized the elephant as “the beast which passeth all others in wit and mind” and the animal has long figured in cultural artifacts, even on continents it has never inhabited. Now Elephant provides an engaging look at the elephant’s long legacy.
The image of the elephant can be found throughout world cultures as a symbol of intelligence, strength, and loyalty. Wylie draws on a rich array of examples to document that symbolic power, ranging from symbols of the Hindu god of wisdom, Ganesh, to the beloved children’s works Dumbo and Babar the Elephant.
Turning to the elephant’s biological history, Wylie describes the three remaining species—the African Bush Elephant, African Forest Elephant, and the Asian Elephant—and the controversial efforts for elephant conservation. With ivory poaching and human encroachment into the animal’s natural habitats, Wylie argues that we face a uniquely poignant conservation crisis in which elephants and humans both unsustainably consume limited natural resources.
A compelling new entry in the Animal series, Elephant will be necessary for every animal lover’s bookshelf.
AUTHOR BIOGRAPHY
Dan Wylie is associate professor of English at Rhodes University in Zimbabwe. He is the author of several books, including Myth of Iron: Shaka in History and Toxic Belonging?: Identity and Ecology in Southern Africa.
TABLE OF CONTENTS