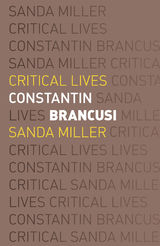 Acknowledged as one of the major sculptors and avant-garde artists of the twentieth century, Constantin Brancusi (1876–1957) was also one of the most elusive, despite his fame. His mysterious nature was not only due to his upbringing in Romania—which, at the time, was still regarded by much of Europe as a backward country haunted by vampires and werewolves—but also because Brancusi was aware that myth and an aura of otherness appealed to the public. His self-mythology remained intact until the publication of Brancusi in 1986 by Romanian artists Alexandre Istrati and Natalia Dumitresco, who made available a small selection of the archive of Brancusi’s correspondence. And in 2003, a comprehensive catalogue, which made the bulk of Brancusi’s private correspondence public for the first time, was published by the Centre Pompidou to accompany a retrospective on Brancusi’s work.

In Constantin Brancusi, Sanda Miller employs these extensive new resources to better assess Brancusi’s life and work in relationship to each other, providing valuable and innovative insights into his relationships with friends, collectors, dealers and lovers. Miller’s perceptive book allows Brancusi to finally take his rightful place among the most important of the intellectual personalities who shaped twentieth-century modernism.

Sanda Miller is a senior lecturer in fashion writing and culture at Southampton Solent University.  Her previous books include Constantin Brancusi: A Survey of His Work and The Dark Night of the Soul: Ana Maria Pacheco.