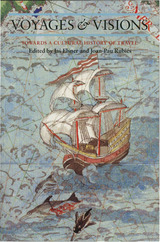 A much-needed contribution to the expanding interest in the history of travel and travel writing, Voyages and Visions is the first attempt to sketch a cultural history of travel from the sixteenth century to the present day. The essays address the theme of travel as a historical, literary and imaginative process, focusing on significant episodes and encounters in world history.

The contributors to this collection include historians of art and of science, anthropologists, literary critics and mainstream cultural historians. Their essays encompass a challenging range of subjects, including the explorations of South America, India and Mexico; mountaineering in the Himalayas; space travel; science fiction; and American post-war travel fiction. Voyages and Visions is truly interdisciplinary, and essential reading for anyone interested in travel writing.

Joan-Pau Rubies is a lecturer in History at the University of Reading.
REVIEWS
"A fascinating and wide-ranging volume."
— History

"Provides insight into why history's travellers have responded in such different ways to new people and cultures."
— The Good Book Guide