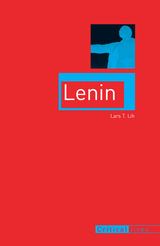 After Karl Marx, Vladimir Lenin (1870–1924) is the man most associated with communism and its influence and reach around the world. Lenin was the leader of the communist Bolshevik party during the October 1917 revolution in Russia, and he subsequently headed the Soviet state until 1924, bringing stability to the region and establishing a socialist economic and political system.

In Lenin, Lars T. Lih presents a striking new interpretation of Lenin’s political beliefs and strategies. Until now, Lenin has been portrayed as a pessimist with a dismissive view of the revolutionary potential of the workers. However, Lih reveals that underneath the sharp polemics, Lenin was actually a romantic enthusiast rather than a sour pragmatist, one who imposed meaning on the whirlwind of events going on around him. This concise and unique biography is based on wide-ranging new research that puts Lenin into the context both of Russian society and of the international socialist movement of the early twentieth century. It also sets the development of Lenin’s political outlook firmly within the framework of his family background and private life. In addition, the book’s images, which are taken from contemporary photographs, posters, and drawings, illustrate the features of Lenin’s world and time.

A vivid, non-ideological portrait, Lenin is an essential look at one of the key figures of modern history.

Lars T. Lih is an independent scholar who lives in Montreal. His other books include Bread and Authority in Russia, 1914–1921 and Lenin Rediscovered: “What is to be Done?” in Context.

“A carefully drawn, subtle yet compelling portrait of a revolutionary. This is probably the best and most reliable treatment we have had on Lenin in many decades, and it will fill a gap for scholars, students, and the general public.”—Ronald Suny, University of Michigan

“A scholarly, highly accessible book. It uniquely links Lenin to a political project for human liberation . . . the best treatment of Lenin and his ideas I have seen in recent years.” —Immanuel Ness, City University of New York

2. The Merger of Socialism and the Worker Movement

5. Beyond the ‘Textbook à la Kautsky’