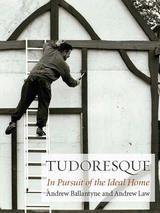 With its distinctive gables and arches, Tudor-style architecture is recognized around the world as a symbol of British culture; it represents the idea of home to British citizens in the United Kingdom and abroad. Some love it, others hate it, but the Tudoresque is still being built—to give a house an old-fashioned air or to create a sense of exotica. Yet few people know anything about how Tudor Revival buildings came to be. To fill this gap is Tudoresque, an insightful book that explores the origin of the style, tracing its roots to the antiquarian enthusiasms of the eighteenth century.

It looks at the Tudoresque cottage style, which later influenced 1930s architecture, and the Tudor-style manor house, particularly favored in the nineteenth century. While the style has been discouraged since the 1920s (and is especially reviled by modernists) it continues to be a popular choice—particularly when the architect doesn’t have the upper hand. The authors here show how the style is the mainstream of twentieth-century British architecture and explore how it has travelled abroad. From Tudor Village in Queens to Stan Hywet Hall in Akron to Malaysia, Shanghai, and Singapore, Tudor Revival has found a comfortable home across the globe. These black and white gabled buildings are important not so much because they are great architecture, but because they are everywhere.

Illustrated with images from more than 200 years of the Tudor Revival, and including examples from Britain, America, India and East Asia, this knowledgable and entertaining book will be an indispensable guide to the one of the world’s most iconic architectural styles.
AUTHOR BIOGRAPHY