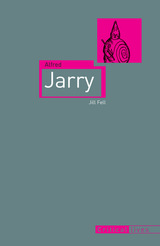 Alfred Jarry’s (1873–1907) creation of the monster-tyrant Ubu in his play Ubu Roi was a watershed in theater history and brought him instant notoriety following its Paris premiere in 1896. In this concise, critical biography, Jill Fell explores this and the many achievements that this multi-talented and influential writer and playwright crammed into his short life.

Drawing on numerous anecdotes and the early publications of the Collège de ’Pataphysique, Fell traces Jarry’s growth and influence, as he rapidly established his literary reputation as a prose writer, journalist, art critic, and playwright. Along the way, Fell explores his interaction with a wide cast of avant-garde characters, including Gauguin, Rachilde, Wilde, Beardsley, and Apollinaire. The quarrels that punctuated Jarry’s life—and the extravagance and the drinking that drained his meager wealth—form the background to this portrait of an obsessive writer, committed to his craft and undeterred by his worsening domestic circumstances.

Inthis entertaining biography, Jarry’s spirit and his inventions clearly emerge as an inspiration to the great figures of experimental twentieth-century theatre, art, and literature. Alfred Jarry will inform and delight readers who wish to learn more about this fascinating, unconventional figure.

Jill Fell is an associate research fellow in the French department at Birkbeck College, University of London. She is also the author of Alfred Jarry: An Imagination in Revolt.

“Jill Fell, known for her ongoing work on Jarry, brings a wealth of knowledge and interpretive skin to his oeuvre. . . . As we see with Jarry, it is difficult to sort out the strands of autobiography from his fanciful artistic expression. His innovative performance of self and his constant toying with authenticity purposefully resists knowability. Fell intimates that we are better off teasing out his questions rather than searching for resolutions, and this is precisely the great value of her work.”


Prologue
1   Laval, Saint-Brieuc and Rennes
2   Literary Success and a Rejected Coat
3   The Art Magazine Editor
4   Military Service: Fiction and Fact
5   'After Us the Savage God'
6   'The Rising Light of the Quartier Latin'?
7   From Puppets to Pataphysics
8   Through the Dimensions
9   Journalism, Le Surmâle and Brussels
10 Poverty, Illness and Death
Epilogue