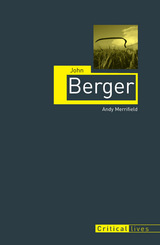 With a career in literature and art spanning more than sixty years, John Berger is characterized by an independent and anti-institutional approach to creativity. Working in a range of media including novels, painting, essays and scriptwriting, Berger's voice has resounded through mainstream and alternative culture alike. He is perhaps best known for his seminal book of art criticism Ways of Seeing, published in 1972. Tied directly into a four-part BBC television series, the book presented a radical new interpretation of Western cultural aesthetics. In the same year, Berger's experimental novel G. was awarded the Man Booker Prize for Fiction, cementing his reputation as a boundary-pushing writer and thinker. In this concise yet detailed study of Berger's life and work, the first for decades, Andy Merrifield sheds light on Berger the man, the artist, and the concerned citizen. Merrifield shows Berger to be a figure who constantly strives to open up new horizons, and also reveals the depth of feeling that infuses even his most intellectual work. In this sense, Berger is a creator who feels reality like the irrationalist Rousseau, yet is also a meticulous realist, probing objects critically and rationally like Spinoza. John Berger stitches together art, literature, biography and politics into a lucid, coherent whole. The result is a reader-friendly, freewheeling narrative, which gives fascinating insight into one of the most influential thinkers of our times. The book is essential reading for students and scholars of art, literature and twentieth-century culture.
AUTHOR BIOGRAPHY

Andy Merrifield is an independent scholar and author of Guy Debord, The Wisdom of Donkeys, and Magical Marxism.

“An illuminating new take on John Berger’s wide-ranging work, and the ideas and people that have helped shape his books and diverse collaborations.”

— Mike Dibb, filmmaker and director of the BBC TV series Ways of Seeing


Introduction: The Blackbird, the Badger and the King