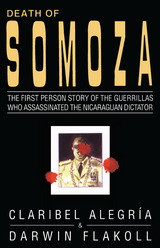 Death of Somoza
by Claribel Alegría, Darwin J. Flakoll and D. J Flakoll
Northwestern University Press, 1996
Paper: 978-1-880684-26-9
Death of Somoza reveals the inside story of the assassination of Anastasio Somoza Debayle in Asuncion, Paraguay in 1980. Alegria and Flakoll, on the recommendation of Julio Cortazar, met "Ramon," a leader in the Argentinian Revolutionary Workers' Party (PRT) and with his help were able to interview all the survivors of the commando team that carried out the "bringing to justice" of Somoza. Alegria and Flakoll rewove these testimonies into a narrative that reads like a thriller and gives a vivid picture of the political and social climate of the time. Enlivened by its colorful cast of characters, Death of Somoza is the definitive account of how Anastasio Somoza Debayle was brought to justice. This story is not an apology for terrorism, but rather the chronicle of a tyrannicide.
AUTHOR BIOGRAPHY
Claribel Alegría was a Salvadorian-Nicaraguan poet, essayist, novelist, and journalist who was a major voice in the literature of contemporary Central America. She has been called "one of the region's finest writers" by The Washington Post. Alegría published over forty books, including fifteen collections of poetry, and was a recipient of the Casa de las Americas Prize of Cuba. Her works in English include Ashes of Izalco, Luisa in Realityland, and Family Album. She was awarded the 2006 Neustadt International Prize for Literature. She died in 2018.

In 1947 Alegría married the U.S.-born journalist Darwin J. ("Bud") Flakoll; they had three daughters and one son. Flakoll coauthored some of her novels and translated much of her work into English. He died in 1995. Alegría's Sorrow, a collection of love poems, was written for her deceased husband.