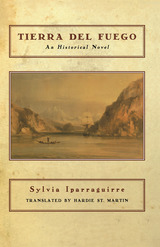 Tierra del Fuego
by Sylvia Iparraguirre
translated by Hardie St. Martin
Northwestern University Press, 2000
Paper: 978-1-880684-72-6
Tierra del Fuego is more than a suspenseful seafaring tale in the tradition of Captain Hornblower; it is also a chilling psychological and cultural tale, reminiscent of Heart of Darkness or Lord of the Flies, that probes deeply into human nature. Based on the true story of the Yámana Indian, Jemmy Button (parts of which are recorded in Chapter 10 of Charles Darwin's The Voyage of the Beagle), the novel explores Captain Robert Fitzroy's abduction of Jemmy Button and his attempt to "civilize" him in England and return him to his country as a bearer of "enlightened society." His experiment leads to tragic consequences. The novel deals with European arrogance and exploitation, but avoids falling into the cliché of "the Noble Savage." Jemmy (the "Other") remains strange and the attempt to co-opt him fails.

Tierra del Fuego has already won two major awards for the Spanish edition: The Sor Juana Inés de la Cruz Award for the best work of fiction written by a woman and The Best Book of the Year Award at the Buenos Aires Book Fair.

AUTHOR BIOGRAPHY
An outspoken human rights advocate, Sylvia Iparraguirre has already gained considerable fame in Argentina where she was involved in several magazine projects criticizing the military dictatorship in Argentina. Tierra del Fuego is her second novel. She has also published four collections of short stories, one of which, In the Winter of the Cities, won the Municipal Prize for Literature.

Hardie St. Martin was one of the most prominent Spanish to English translators of his time. In his long and distinguished career, he translated Juan Gelman, Pablo Neruda, Miguel Hernández, Blas de Otero, and others. He died in Barcelona in 2007.
REQUEST ACCESSIBLE FILE