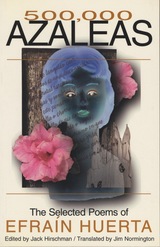 Northwestern University Press, 2010
Paper: 978-1-880684-73-3
In verses that fuse highly original imagery with exuberant rhythms, Efraín Huerta probes the cultures of both Mexico and "el Norte," from the impact of racism in Mississippi to political corruption in Mexico. Since he demanded for life and art the same freedom he demanded for politics, his poetry is often erotic. His poems are passionate outcries to love and justice, characterized by original metaphors and an acerbic wit that earned him the nickname "Crocodile."
AUTHOR BIOGRAPHY
Poet and journalist Efraín Huerta was born was born in Silao, Guanajuato, Mexico in 1914. As a poet, he published regularly from the 1930s to the 1980s, and as a journalist collaborated with over twenty newspapers and journals, under his own name and using pseudonyms. He died in Mexico City in 1982. Show MoreDuring his lifetime he received many honors and awards, including the Palmas Academicas in France in 1945, the Villaurrutia Poetry prize in 1975, and the National Journalism Prize in 1978. 500,000 Azaleas, published with the support of the U.S.-Mexico Fund, is the first collection of his poetry in English.

Jack Hirschman is a San Francisco poet, translator, and editor. He is the author of numerous books of poetry, plus some 45 translations from a half a dozen languages, as well as the editor of anthologies and journals.

Jim Normington is a Northern California poet and translator.
TABLE OF CONTENTS

La Ausente
The Missing One

Acerca de la Melancolia
With Regard to Melancholy

Ellos Estan Aqui
Here They Are

El Viejo y la Polyvora
The Old One and the Gunpowder

Borrador para un Testamento
Sketch for a Last Will and Testament