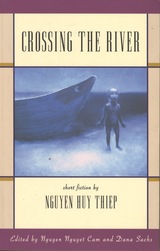 Crossing the River presents a wide range of Nguyen Huy Thiep's short fiction, both realistic stories in contemporary settings and retellings of folk myths that serve as contemporary parables. When Thiep's stories first appeared in the 1980s, they set off a chain of debate, not only within intellectual and political circles, but also within the society at large. Typically, the struggles of his characters were about survival, not survival in the context of war or revolution, but survival in the context of the emotional and psychological strength it takes to live within the harsh confines of post-war Vietnamese society. Thiep captured the emotional quality of Vietnamese life in a way no other author had done, and his importance can be recognized today by his enormous influence on younger writers.

AUTHOR BIOGRAPHY
Nguyen Huy Thiep, born in Hanoi in 1950, spent much of his youth in rural Vietnam where his mother worked as an agricultural laborer. By 1987, he began to be published in the major literary journals in Vietnam, and during the "renovation" period of 1988, more than 20 of his stories were published. He is widely considered Vietnam's finest short story writer.

Nguyen Nguyet Cam is a Vietnamese translator. She has taught Vietnamese literature at UC Berkeley for almost a decade, and is currently a PhD candidate.

Dana Sachs is an American translator and author, who focuses her work on Vietnam. She has written several books of fiction and non-fiction.
TABLE OF CONTENTS

Crossing the River
Lessons from the Countryside
The General Retires
Without a King
My Uncle Hoat
The Winds of Hua Tat: Ten Stories in a Small Mountain Village
The Salt of the Jungle
A Drop of Blood
A Sharp Sword
Fired Gold
Chastity
Rain
Life's So Fun
Love Story Told on a Rainy Night
Remembrance of the Countryside
The Water Nymph
The Woodcutters