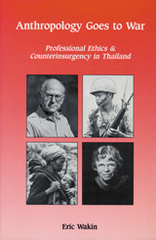 Anthropology Goes to War: Professional Ethics and Counterinsurgency in Thailand
by Eric Wakin
University of Wisconsin Press, 1998
Paper: 978-1-881261-03-2
In 1970 a coalition of student activists opposing the Vietnam War circulated documents revealing the involvement of several prominent social scientists in U.S. counterinsurgency activities in Thailand—activities that could cause harm to the people who were the subject of the scholars’ research. The disclosure of these materials, which detailed meetings with the Agency for International Development and the Defense Department, prompted two members of the Ethics Committee of the American Anthropological Association to issue an unauthorized rebuke of the accused. Over the next two years, the AAA agonized over the allegations and the appropriate response to them. Within an academic community already polarized by the war, political and professional acrimony reached unprecedented levels. Although the association ultimately passed a code of ethics, the key issues raised in the process were never fully resolved.
Now back in print, Eric Wakin's Anthropology Goes to War is the first comprehensive study of what became known as the Thailand Controversy—and a timely reminder of a debate whose echoes may be heard in our own time.

Eric Wakin has M.A. degrees in Asian studies and political science. He has traveled extensively in Thailand and is now a PhD candidate in U.S. history at Columbia University.

REVIEWS
“At a time when the ethics of ethnography are again in question, Eric Wakin’s richly documented account of an earlier moment when the politics of anthropology was under scrutiny is particularly salient. . . . This book is must reading for students of Southeast Asian societies, for an older generation of anthropologists who think they know the story, and for a new generation that hasn’t heard it. It also addresses a wider audience of intellectuals concerned with the relationship between academic knowledge and political power.”—Ann Stoler, Willy Brandt Distinguished University Professor of Anthropology and Historical Studies, The New School for Social Research


“Conveys both a great deal of information and clear judgment that can serve as a welcome starting point for revisiting the Thailand controversy.”—Andrew Turton, The Journal of Asian Studies

“Wakin's resurrection of this conflict reminds us of the ethical issues involved in undertaking contract work for the government. . . . Anthropology Goes to War raises the essential questions, provides plenty of material for debate, and would be a useful addition to classes dealing with field work and professional ethics.”—W. Randall Ireson,
American Ethnologist

EXCERPT
Thai villager: What kinds of questions are you going to ask us? . . . .You are not going to take the names of villagers and tell the police that we are communists, are you? We would die, if you did. . . . We are very much afraid of communists. . . . .we have never seen them. . . . Researcher: If you don't know about communists, why are you afraid of them?
REQUEST ACCESSIBLE FILE