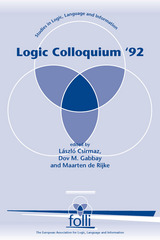 Logic Colloquium '92, the European Summer Meeting of the Association for Symbolic Logic, was held in Veszpre;m, Hungary, in August 1992. Two of the main themes of the event were algebraic logic, and axiomatisability and decidability of logical systems. The present volume contains a selection of papers that grew out of invited and contributed talks on these themes. Most of the papers have a strong interdisciplinary flavour as they investigate logical properties of formal systems by studying algebraic properties of corresponding classes of algebras, or vice versa. The remaining papers focus on connected areas from model theory and the combination of logics. This is a useful and timely volume on algebraic logic and related areas, with contributions by leading people in the field.
TABLE OF CONTENTS