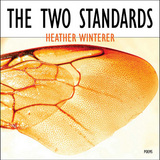 Heather Winterer explores the intimate territory between desolation and consolation, offering a poetry that translates the distances between spiritual endings and beginnings, between an "after what it used to be" and "an arrival." The work enacts the model of St. Ignatius Loyola, encouraging the collapse of lines between creation and creativity, time and space, the Christian and Christ, the self and the other. The voice of these poems moves exuberantly through various forms, resisting predication and celebrating its own multiplicity. With lyrical dexterity and humor, Winterer invites us into her world, a world of tangible absences and presences--where the Mojave Desert and the city of Las Vegas become the unlikely sites of spiritual encounter. The god of this quirky world appears in cars, apartment buildings, and swimming pools and speaks to us through desert plants and birds. Everything from the outside--natural and unnatural--spills into the poems and they turn whatever they are given into movement away from darkness and loss, toward possibility, potency and grace.
AUTHOR BIOGRAPHY
Heather Winterer's poems have appeared in Hotel Amerika, American Poetry Review, Fence, and elsewhere. She teaches at the College of Northern New Mexico in Española.
TABLE OF CONTENTS
Cover
Contents
Translations / An Approach
Incarnation
Childhood
Multiplication
Greeting
Riot
Landscape
Past
Pigdogs
Philosophy
Coffee Shop
Reef
Instinct
Ezra Pound
The Garden
Translations / Valley of the Shadow
Annotations
The End
Prayer
Chalet Vegas Apartments 2 A.M.
Big Bang
Adam and Eve at Lascaux
Pearl
Colloquy
Seven
“The Embedded Editor”
Commentary
Translations / The Call of the Temporal King
Antiphon I
Antiphon II
Highway 99
Who They Were
What They Were Saying
What They Were Doing
Colloquy / Annunciation
Nativity
Simeon and Anna
Temple
Oh No
Walking On Water
Beatitude
The Temptation of Christ in the Desert
The Two Standards
Translations / Crackdown
Prayer
Washing the Fleet of the Apostles
Outside Gethsemane
Palm Sunday
Parque Los Volcanoes
Tuesday Service / El Higueral
Wednesday / El Higueral
Good Friday / La Palma
Saturday / San Salvador
Shine
Translations / Apparition
Black Ceding the Day
Spoon Grass
Cholla
Idol
Agave
Joshua Tree
Barrel Cactus
Ocotillo
Saguaro
Mesquite
Prayers of Gratitude
Translations / An Approach
Acknowledgments
REQUEST ACCESSIBLE FILE