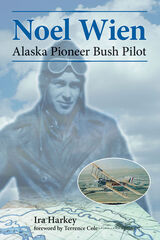 Noel Wien: Alaska Pioneer Bush Pilot
by Ira Harkey
University of Alaska Press, 1999
Paper: 978-1-889963-16-7
From his days as one of Alaska's earliest bush pilots through the years spent developing Wien Air Alaska with his brothers, Noel Wien built up a long list of firsts: he was first to fly commercially from Fairbanks to Nome and from Fairbanks to Seattle, first to fly from Anchorage to Fairbanks, first to fly and land beyond the Arctic Circle, and first to make a round-trip flight between Alaska and Asia.

Wien shared a vision to bring commercial aviation to the Far North, and he acted on it.  He had 538 hours of barnstorming and aerial circus stunt flying behind him when he arrived in Alaska in 1924.  At that time, Alaska's rugged terrain permitted little more than primitive means of communication and transportation.  There were no air charts and no radio communication.  Navigation depended solely on a pilot's use of natural features of checkpoints, but the innumerable rivers and mountains too easily could look identical.  Safe landing sites were scarce.  Wien embraced the challenge presented by these obstacles with courage tempered by his native caution - not to mention exceptional talent and a boundless love of flying.  Before long, supplies could be taken to settlements previously serviced only by dog sled and sick persons could be transported quickly to hospitals.

In this dramatic account of a flying hero, Pulitzer Prize winning author Ira Harkey describes Wien's experiences in an engaging style, and he establishes Wien's place in Alaska history.  In the process, Harkey makes a valuable contribution towards an understanding of the Alaska of the recent past and the people who lived there.

This commemorative edition marks the 75th anniversary of Noel Wien's arrival in Alaska as well as his pioneering flight between Anchorage and Fairbanks.  It includes additional photographs and an informative new foreword by Cole.

Noel Wien pursued his vision through decades of wild experiences in an unyielding land.  His aviation milestones brought the people of Alaska closer and helped open Alaska to the outside world.
AUTHOR BIOGRAPHY
In 1963 Ira Harkey received a Pulitzer Prize for distinguished editorial writing and was Carnegie Visiting Professor at the University of Alaska in 1968 to 1969.  He is the author of The Smell of Burning Crosses (1967)
TABLE OF CONTENTS

37. One-Eyed Pilot with a Limp