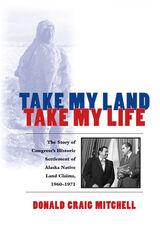 In Take My Land, Take My Life, Mitchell concludes the story of the 134-year history of the U.S. government's relations with Alaska's Native people. The culmination of that tale occurred in 1971 when Congress enacted the Alaska Native Claims Settlement Act. ANCSA authorized Alaska Natives to be paid $962.5 million and to be conveyed title to 44 million acres of land. Though highly controversial, ANCSA remains the most generous settlement of aboriginal land claims in the nation's history. Mitchell's insightful, exhaustively researched work also describes the political history during the first decade of Alaska statehood, from the rise of Native organizations such as the Alaska Federation of Natives to the battles for power in the subcommittees of Congress.

"A terrific account of a stirring political struggle and important piece of American history. Take My Land, Take My Life is one of those rare works of genuine must-reading for anyone interested in the struggles of North American Native peoples to achieve identity and justice." -Leonard Garment, counsel to President Richard M. Nixon
AUTHOR BIOGRAPHY
Donald Craig Mitchell is a former vice president and general counsel of the Alaska Federation of Natives, organized by Alaska Natives in 1967 to fight for their historic land claims settlement. For more than two decades he has been intimately involved, both before Congress and in the courts, in the development and implementation of federal Native policy.
TABLE OF CONTENTS
Contents
Acknowledgments
Introduction
Chapter 1: The Alaska Federation of Natives
Chapter 2: Land Freeze
Chapter 3: Nineteen Sixty-Nine
Chapter 4: Nineteen Seventy
Chapter 5: ANCSA
Epilogue
Notes
Bibliography
Index
REQUEST ACCESSIBLE FILE