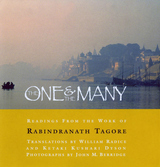 William Radice, who has translated Tagore for years, is a Professor at the School of Oriental and African Studies at the University of London. He is also a poet in his own right.

The second translator, Ketaki Kushari Dyson, was born in Calcutta in 1940 and educated at Calcutta and Oxford. In 1963 she became the first Indian woman to gain a First in English Literature at Oxford. She also has a doctorate from Oxford. Based in Britain since her marriage to an Englishman, she maintains close links with the literary life of her native city and is regarded as a significant Bengali writer of her generation.


AUTHOR BIOGRAPHY
Rabindranath Tagore (1861-1941) was a major literary and artistic figure of the past two hundred years. Winner of the Nobel Prize in Literature in 1913 he was a persoanl friend not only of Mahatma Gandhi, Albert Einstein, and W. H. Auden, but was admired throughout the world. Apart from his contributions to the worlds of poetry, music, visual arts, he was also instrumental in establishing Shantiniketan University, to this day an ideal for higher education in the arts and humanities.