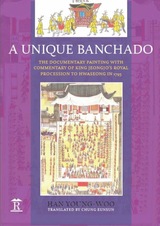 A Unique Banchado: The Documentary Painting of King Jeongjo’s Royal Procession to Hwaseong in 1795
by Han Young-woo
translated by Chung Eunsung
Amsterdam University Press, 2017
eISBN: 978-1-898823-54-4
Fully illustrated in colour, here is the first introduction in English to one of Korea’s outstanding cultural assets – the banchado (‘painting of the order of guests at a royal event’) – relating to all those taking part (1800 people) in the eight-day royal procession to Hwaseong (Gyeonggi Province) organized by King Jeongjo in 1795 for the dual purpose of visiting his father’s tomb and celebrating his mother’s sixtieth birthday. The banchado is a fine example of the meticulous record-keeping of the period (known as uigwe – the subject-matter of this book being known as the Wonhaeng eulmyo jeongni uigwe) and the skills of the court artists at that time. In addition to the banchado illustrations, the Wonhaeng eulmyo jeongni uigwe contains extensive lists of all the participants in the procession, details of the workers and technicians involved, including their duties and wages. It even includes the different foods offered at meal-times, the quantity of ingredients and the costs. The author provides a full analysis of the context, planning, execution and significance of the event.
AUTHOR BIOGRAPHY
The author Han Young-woo, is emeritus professor of Korean history at Seoul National University, where he was also dean of the College of Humanities and director of the Kyujanggak Institute for Korean Studies. In addition, he served as a distinguished scholar of the Hallym Academy of Sciences at Hallym University and emeritus professor at Ewha Womans University while also serving as dean of Ewha Academy for Advanced Studies.
TABLE OF CONTENTS


Author’s Preface to the English Edition

1. What Sort of King Did Jeongjo Dream of Being?

2. What Hwaseong Meant to Jeongjo

· King’s Spirit and Ambition Declared to the World

· Paradise – Where Every Home is Rich and All People are Happy

· A King Who Even Knew the Names of the Workers

3. Why Jeongjo Made Frequent Visits to Hwaseong

4. The Banchado – A Visual Record of the Grand Visit to Hwaseong

5. ‘Luxury and Extravagance Shall Be Punished Rigorously’

· Pontoon Bridge Designed by the King

· Groundbreaking Innovation in the History of Bridge Construction

7. The Eve of the Procession

PART IV: EIGHT-DAY RECORD OF THE ROYAL PROCESSION TO HWASEONG

8. The First Day (Ninth Day of the Intercalary Second Month)*

· The Grand March Starts from Changdeokgung Palace at Daybreak

9. The Second Day (Tenth Day of the Intercalary Second Month)

10. The Third Day (Eleventh Day of the Intercalary Second Month)

11. The Fourth Day (Twelth Day of the Intercalary Second Month)

· The King Mourns for His Deceased Father at Hyeollyungwon Tomb

· Nocturnal Training for the Royal Guards Garrison at Seojangdae Watchtower

12. The Fifth Day (Thirteenth Day of the Intercalary Second Month)

13. The Sixth Day (Fourteenth Day of the Intercalary Second Month)

· Feast for the Elderly at Nangnamheon Hall

14. The Seventh Day (Fifteenth Day of the Intercalary Second Month)

· The Itinerary of the Return from Hwaseong to Siheung

15. The Eighth Day (Sixteenth Day of the Intercalary Second Month)

Appendix I: Details of the Itinerary of the Royal Procession to Hwaseong

Appendix II: Major Figures of the Retinue: Titles at the Time of the Royal Procession in 1795