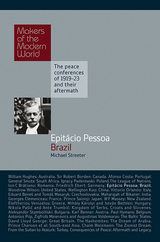 BUY FROM
Epitacio Pessoa: Brazil
by Michael Streeter
Haus Publishing, 2010
Cloth: 978-1-905791-86-6
eISBN: 978-1-907822-28-5
Brazil was one of the emerging world powers to be invited to the Paris Peace Conference in 1919. Having jettisoned her empire just thirty years before, the Portuguese-speaking nation was showed signs of becoming one of the financial powerhouses not just of Latin America, but of the world. Helped by abundant natural resources, cheap labour and large-scale immigration, Brazil’s economy had grown massively – and now it wanted to take its proper place in the society of world nations. In Paris, the country’s delegation was led by Epitacio Pessoa, a brilliant lawyer who had made his mark in national politics and was also a committed Europhile. It was a shrewd choice; helped by the Americans, Pessoa negotiated a deal to rescue Brazilian coffee from the German ports where it had languished since the middle of the war. He also helped win a place at the top table for Brazil in the new League of Nations. Pessoa was then rewarded by being elected president of Brazil – even though he was in Paris at the time. Yet even as Brazil enjoyed its moment of triumph on the international stage, the country’s political system was starting to unravel. Pessoa’s presidency ended in failure in 1922, its modest achievements overshadowed by bitter army revolts. And as Pessoa embarked on a new career as an international judge, his country slipped further into political infighting between elite oligarchies until the ageing republic finally folded in 1930. This, then, is the story of Epitacio Pessoa, the Treaty of Versailles and the rise and fall of Brazil’s tumultuous First Republic.
AUTHOR BIOGRAPHY
Michael Streeter is an experienced writer and journalist who has travelled widely in Latin America and has an MA in Latin American politics and history from the University of London. His books include a biography of General Franco and The Mediterranean: Cradle of European Culture. He has written for national newspapers and was editor of the Daily Express website. He also runs a news consultancy.
TABLE OF CONTENTS
Contents
Preface
I. The Life and the Land
1. Creation of the Republic: 1889–1900
2. Order and Progress: 1900–10
3. The Republic Unravels: 1910–17
4. Brazil at War: 1917–18
II. The Paris Peace Conference
5. Paris 1919
6. From Delegate to President: April–June 1919
III. The Legacy
7. Power and Problems: 1919–22
8. Last Days of the Republic: 1922–30
Notes
Chronology
Further Reading
Picture Sources
Index