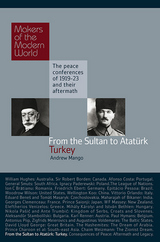 World War I sounded the death knell of empires. The forces of disintegration affected several empires simultaneously. To that extent they were impersonal. But prudent statesmen could delay the death of empires, rulers such as Emperor Franz Josef II of Austria-Hungary and the Ottoman Sultan Abdü'lhamid II. Adventurous rulers - Kaiser Wilhelm of Germany and Enver Pasha in the Ottoman Empire - hastened it. Enver's decision to enter the war on the side of Germany destroyed the Ottoman state. It may have been doomed in any case, but he was the agent of its doom. The last Sultan Mehmet VI Vahdettin thought he could salvage the Ottoman state in something like its old form. But Vahdettin and his ministers could not succeed because the victorious Allies had decided on the final partition of the Ottoman state. The chief proponent of partition was Lloyd George, heir to the Turcophobe tradition of British liberals, who fell under the spell of the Greek irredentist politician Venizelos. With these two in the lead, the Allies sought to impose partition on the Sultan's state. When the Sultan sent his emissaries to the Paris peace conference they could not win a reprieve. The Treaty of Sèvres which the Sultan's government signed put an end to Ottoman independence. The Treaty of Sèvres was not ratified. Turkish nationalists, with military officers in the lead, defied the Allies, who promptly broke ranks, each one trying to win concessions for himself at the expense of the others. Mustafa Kemal emerged as the leader of the military resistance. Diplomacy allowed Mustafa Kemal to isolate his people's enemies: Greek and Armenian irredentists. Having done so, he defeated them by force of arms. In effect, the defeat of the Ottoman empire in the First World War was followed by the Turks' victory in two separate wars: a brief military campaign against the Armenians and a long one against the Greeks. Lausanne—where General Ismet succeeded in securing peace on Turkey's terms—was the founding charter of the modern Turkish nation state. But more than that it showed that empires could no longer rule peoples against their wishes. This need not be disastrous: Mustafa Kemal demonstrated that the interests of developed countries were compatible with those of developing ones. He fought the West in order to become like it. Where his domestic critics wanted to go on defying the West, Mustafa Kemal saw that his country could fare best in cooperation with the West.
AUTHOR BIOGRAPHY
Andrew Mango is the author of the definitive biography of Atatürk (2002), as well as an account of modern Turkey, The Turks Today (2004). For 14 years he was head of broadcasting in Turkish for the BBC and later headed the BBC’s South European Service and its French Language Service.
TABLE OF CONTENTS
Contents
Acknowledgements
Note on Spelling and Pronunciation
I. Sèvres
1. Illusions of Power
2. Broken Promises
3. Turks Fight for their Rights
II. Lausanne
4. Western Revolution in the East
5. At One with Civilisation
III. The Aftermath
6. Creating a New State and Nation
Notes
Chronology
Further Reading
Picture Sources
Index