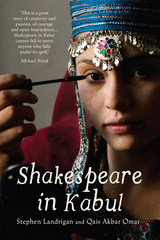 In 2005, a group of actors in Kabul performed Shakespeare's Love’s Labour's Lost to the cheers of Afghan audiences and the raves of foreign journalists. For the first time in years, men and women had appeared onstage together. The future held no limits, the actors believed. In this fast-moving, fondly told and frequently very funny account, Qais Akbar Omar and Stephen Landrigan capture the triumphs and foibles of the actors as they extend their Afghan passion for poetry to Shakespeare's.Both authors were part of the production. Qais, a journalist, served as Assistant Director and interpreter for Paris actress, Corinne Jaber, who had come to Afghanistan on holiday and returned to direct the play. Stephen, himself a playwright, assembled a team of Afghan translators to fashion a script in Dari as poetic as Shakespeare's. This chronicle of optimism plays out against the heartbreak of knowing that things in Afghanistan have not turned out the way the actors expected.
AUTHOR BIOGRAPHY
Qais Akbar Omar lives in Boston and is the author of A Fort of Nine Towers (FSG, 2013). Stephen Landrigan is a playwright, he lives in Boston and returns to Kabul often.