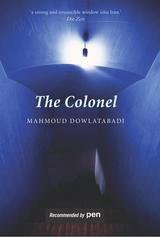 BUY FROM
The Colonel
by Mahmoud Dowlatabadi
translated by Tom Patterdale
Haus Publishing, 2011
Paper: 978-1-906598-89-1
eISBN: 978-1-907822-89-6
A pitch black, rainy night in a small Iranian town. Inside his house the Colonel is immersed in thought. Memories are storming in. Memories of his wife. Memories of the great patriots of the past, all of them assassinated or executed. Memories of his children, who had joined the different factions of the 1979 revolution. There is a knock on the door. Two young policemen have come to summon the Colonel to collect the tortured body of his youngest daughter and bury her before sunrise. The Islamic Revolution, like every other revolution in history, is devouring its own children. And whose fault is that? This shocking diatribe against the failures of the Iranian left over the last fifty years does not leave one taboo unbroken.